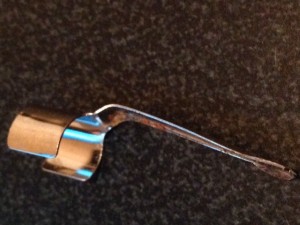 Before bike week in Daytona, my motorcycle was giving me some issues. Basically, it wouldn’t start. Every time I would turn the ignition it would sputter, start, but when I increased the throttle it would choke out.  Something was wrong – and so I started with the carburetor.  I did some research and found the problem might be the pilot jet. It’s job is to feed fuel to the engine, just enough, so when you give it more throttle the main jet takes over without choking out the engine.

I pulled the pilot jet out of the carburetor. It was clogged. When you hold the pilot jet pin up against light, you are supposed to see that light come through. It wasn’t. I cleaned the pin with a cleaner, and a small needle. Once the eyelet was cleared, I put the pilot jet back into the carburetor, and closed it back up.  When I went to start the engine it roared.

This past weekend I decided to jump on my KLR-650 Enduro, and take a ride to the rear entrance of Lake Louisa State Park.  It hummed right along just fine. I parked in the dirt lot, no one else around. Some walkers, joggers came through doing an event – looked like the last leg of it and the last of them.  I locked up my gear, and went for a hike.

I was chugging along on the sand path just taking in the beauty of nature and feeling the very hot sun above. I’d brought with me two Dansani bottles of water, some almonds, a book, my phone, and IPod.  Along the way I got to talk for a while with my life long friend Chris from Ohio on the phone.  Time passed and I was close to being on the trail for two or more hours. I decided to turn back not knowing if I could circle around and from the looks on my GPS, I couldn’t.  So, I hiked back, slow, steady, and a little tired.

When I finally got back to my motorcycle I was beat, hungry and thirsty. I had drank all my water, and ate all my almonds. It was time to go. I suited up, started the motorcycle and shifted it into first gear.  I went forward through some dirt, but it ended up being more like mud. My rear tire sank and I gunned it to get out.  Wet dirt flung out from the rear, and I weaved and spun my way out of the rut and onto the dirt road. Suddenly the engine stalled. Strong scent of gas fumes filled the air. At first I thought maybe I busted a line. Then I thought about where my fuel line runs and it didn’t make sense to me. I tried to start the engine and it all but sputtered. It started a few times, but quickly died again once I hit the throttle. I was stranded.

Three young ladies in their twenties, wearing bikinis had come walking down the wooden bridge that leads from beach on the lake to the where I was.  One asked me if they needed to call 911. I sort of chuckled to myself as I didn’t feel I was in any immediate danger. I quickly thanked her, then stated I had AAA and would call them if I couldn’t get the motorcycle running.

As I worked on the motorcycle the ladies asked me if I knew what was wrong. I told them I thought it was the pilot jet – that it was probably clogged again and that I had taken the carburetor apart and cleaned it about a month ago. They seemed a bit perplexed and started to make jokes.

“How about just turn it off and back on,” one of them said.

“Yeah, I wish I could just reboot it. That would be great wouldn’t it,” I said.

“Maybe you can format the drive,” another said.

“Yeah, I don’t think that works on this model,” I said.

I think they were just trying to lighten things up making silly references to their phones, and computers.

I told them if I had the right tools with me, I could take the carburetor apart and see if the issue was the pilot jet and if so, I could clean it and get the motorcycle up and going.

The three ladies left eventually and I finally gave up on trying to start my motorcycle. I reluctantly called AAA.

“Hello, how may I help you,” a lady from AAA said.

“Hmm, my motorcycle is broke down. I need someone to come and tow it back to my house,” I said.

The AAA folks put me in touch with their dispatcher group, because my coverage only was for my cars. They said they’d call back in about 45 minutes.

I hung up the phone, which was setting at 25% power now and sat down. I thought for a moment – “forty five minutes. I can either wait or I can try and fix my engine with the tools I had on hand.”  I had already done an inventory but I decided to have another go at it.

I got up – walked over to an outside water spicket that was above my shoulders. Turned the water on and rinsed my hair, and face to cool off. I dried my hands on my shirt, and went back to the motorcycle.

I opened the back case on the rear of the motorcycle, and began to sort through it. I had a Philip screwdriver, a pair of  pliers, but I was certain I needed a flat head screwdriver. Oh, well – I’ll first see if I can get the bottom plate off the carburetor and then deal with the issue needing a flat head.

I used the Philips head screwdriver, loosened the clamps on the intake., took off the throttle cable, and then twisted the carburetor towards me.  I had replaced my Phillip screw heads in the carburetor previously with hex heads, because the cross heads had stripped on me and I had to drill them out.  Now with these hex heads in place, I took the pliers, clamped down on the heads one at time and worked them all off slowly.  I finally got all four of them, but it was not as easy as it could have been with a socket wrench.

I pulled the bottom plate off and there in the bottom of the carburetor was my pilot jet pin.  Now it all made sense.  Somehow when I was in that rut, coming up out of it, the pin finally vibrated completely loose and fell out.  I took the pin, held it up to the sun and could see the light shining through the pin hole. That was a good sign. Apparently when I put the pilot jet back in after cleaning it a month ago, I had backed it out too far.  You are supposed to tighten it down all the way, then back it off one and half turns.

So now is the fun part of it all. AAA still has not called me, and I’m thinking if I had a flat head screwdriver I could fix this and be on my way. I called my brother. left a message and hoped he would call back and bring one to me.

But I didn’t wait. I went into MacGyver mode.  MacGyver is an old 80’s TV show where Angus MacGyver can get out of anything with  a Swiss Army Knife, a paper clip and duct tape.

I searched my case again, looking for anything I could use to manufacture a flat head screwdriver. Then it popped into my head. My knife. I could use it. I took out my pocket knife, inserted the pin into the carburetor and tried to use the knife to feed it back in, but it was no use. The knife was too large to go into the small cylinder the pilot jet had to go into.   So, I searched again for something to use.

I found my air gauge, and on the side of it is a clip. I took the clip off, then using my knife bent the tip some, then used my pliers to flatten it out. And would you know, I had a flat head.

I took the clip, fed the pin up into the carburetor and used the clip to tighten it all the way down, then I backed it off one and half turns.

I was so excited now. I checked my phone and there were no missed calls.

I buttoned up the carburetor and started the engine. VAAAOOOMMMM. It revived up. Now I was in business.

My back ached, my legs were sore, I was overheated, hungry and ready to get home. My brother called – he could hear the engine in the background.  I told him I was headed home and if I had any troubles I’d call him back.

I suited back up. Got onto the motorcycle, put it in gear and was waiting for it die on me, but it didn’t. I rode all the way home with no issues. Hurray!!

As soon as I got into the house, I went to the fridge cracked open a bottle of Angry Orchid Hard Cider and took a drink. It was so sweet, and perfect at that moment.

When I got home I had found my sister was trying to find me, my mom was worried about me, and that my brother was playing tricks saying I was lost in the woods, and Bigfoot was going to get me. lol.  Haha brother.

I realized a few things. Trying things on your own, even if you fail can help you later when you have an issue.  Also that without adversity, or struggle, the good things in life don’t seem as great. But when you have struggles and then those good things show up, like knowing people love you and want you to be safe, or the sweet taste of a hard cider just seems well, better.