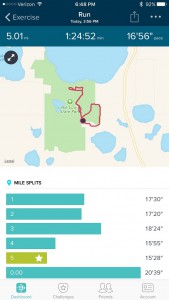 I’m older now, and I’m not able to do the things I once could do with ease. I recall a day when my friend, Craig, called me up to enter with him and his team to do a relay race. I think it was a state or county held event, I didn’t know. I’d never ran in a relay, and I mentioned that to him. He said I’d do fine.  They were down a runner, and needed someone who could run fast. I said sure, I’ll do it and showed up.

It was early morning, the sun was just coming up. People were everywhere dressed in shorts, sneakers, and with numbers on their backs. My friend and his two team mates waited for me on the track. We were introduced, and they said that I’d go last. All I needed to do was to grab the baton before a certain point, but to start my run first and make sure the hand off went smooth. Okay, I thought. Shouldn’t be hard. I was actually terrified but I didn’t let it show.

There was an announcement made, and we were set to run our race. We all got close to the track, and the first runner on our team was up. A horn blew, and he was off running smooth, and fast. He had made it around the track and handed off the baton to his team mate. The new runner was gone in a flash, elbows hammering away, feet pounding the ground, and  doing well.

Craig was next, and I was shaking all over.  I tried to ease the shakes by taking deep breaths, trying to keep my cool but nothing was working. I jumped up and down in place, flicking my arms and hands out in an attempt to calm my nerves. Nothing.

My friend was up, and ready. The other runner came around, and he handed the baton off smooth and easy. I watched, taking in how they did it, to absorb and understand the movement. I mimed the hand off on my own, to be sure I got it.  Craig was off and making it around. My turn was coming. My heart raced, my palms were clammy. I got onto the track, watching, waiting. He was almost here.

I started off, slow, steady just like I’d seen and he rounded the corner, and then he handed the baton off to me. I looked back, making sure to keep my eyes on the baton, making sure I didn’t drop it. It was in my hand, and I gripped it hard, faced down the track and off I went. I was giving it my all. My heart beat hard against my chest. My arms were swinging fast and smooth. My knees high, my feet out, and my conviction set.

I was doing well but then about three quarters of the way I started to slow down, and I was trying to keep my pace. I heard a man call from the side telling me not to quit, keep pushing. I did but I had nothing left. My legs wobbled, my thoughts confused. Could I make it, would I make it, I had to make it. I kept on, pushing with all I had, all my strength, all my will. I drove it all into that moment, into that point in time, and then I was across the finish.

I stumbled to a stop, my legs were like jelly and I heaved in large gulps of air. I’d never done that before, never tested myself to that extent, and now I’d find out if I’d done well or if I was a disappointment.

I looked at the other guys, and their eyes were wide with disbelief. I had done horrible, I felt ashamed. I wanted to go home.

My friend came up to me and patted me on the back and the other guys did the same. Something was different, I’d done something good. Did I? Craig began to tell me my time. He said I’d ran it in 54 seconds. I asked if that was good. He nodded, then said very good and that I had the fastest time out of all of them. I was astonished. I never trained, I never tried, I was never tested until now. I didn’t know I could do this, I didn’t know I was good at it, but here was my friend, and his team mates confirming I’d done well.

I’ll never forget that day. It was a good day. I was glad to have done so well for my friend. I didn’t want to let him down. That feeling inside was what pushed me. It wasn’t to win, it wasn’t to be better than the other guys on the team, it was to make my friend proud. I wanted him to know that I would go all out, I would do whatever I could to not let him down.

Years later I’ve taken running back up. I can’t run like I use to run. It’s harder now. I tested myself this morning, after training the last few months to run an 5K. I can run one lap at 72 seconds. Will I get faster? Time will tell but I doubt I’ll be able to run like I did when I was fifteen years old. Running is hard, but am I doing it to prove something? Am I doing it to win? No. I’m doing this because it’s hard. I’m doing this because it will test me.

Years ago it was a great feeling. Even better because I never let my friend down. Though I must admit. I am running – not for me, but for a friend. I’m running for my wife. She wants to run a half marathon. I’m out there to encourage her, I’m out there in the morning, I’m out there inviting her in the evening to exercise. Why? Because I want to give my all, I want her to see I’m here, and I don’t want to let her down.

Running is hard. Life is hard. Who’s in your life? What would you do for them? Would you give your all? Can you be counted on?

Be an inspiration for another, do something hard and you might just find out that you can do more than you ever imagined.

Find out more on Lydia’s journey – Lydia’s half marathon and consider making  a donation. – Donation